There are various libraries for implementing voice chat,
I decided to use Photon, which seems to have a lot of information in major areas.

However, ** Article on how to implement Photon2 voice chat **
I couldn’t find it.

Can I afford to read the official documentation? I thought,
It was troublesome to test whether it was actually connected, so I took a lot of time, so I will make a note of it.

The first is the introduction of ** Asset called Photon Voice 2.
Import from the asset store. ** **

Set the application ID of ** Photon Server Settings ** in the following path.
Assets\Photon\PhotonUnityNetworking\Resources\PhotonServerSettings

Enter the application ID of the type ** PhotonVoice ** you created earlier.

Next, prepare the necessary components for Hierarchy.
Requires ** PhotonVoiceNetwork ** and ** Recorder **.

Attach it to an appropriate object and
There is almost no problem if the parts surrounded by the red frame match. 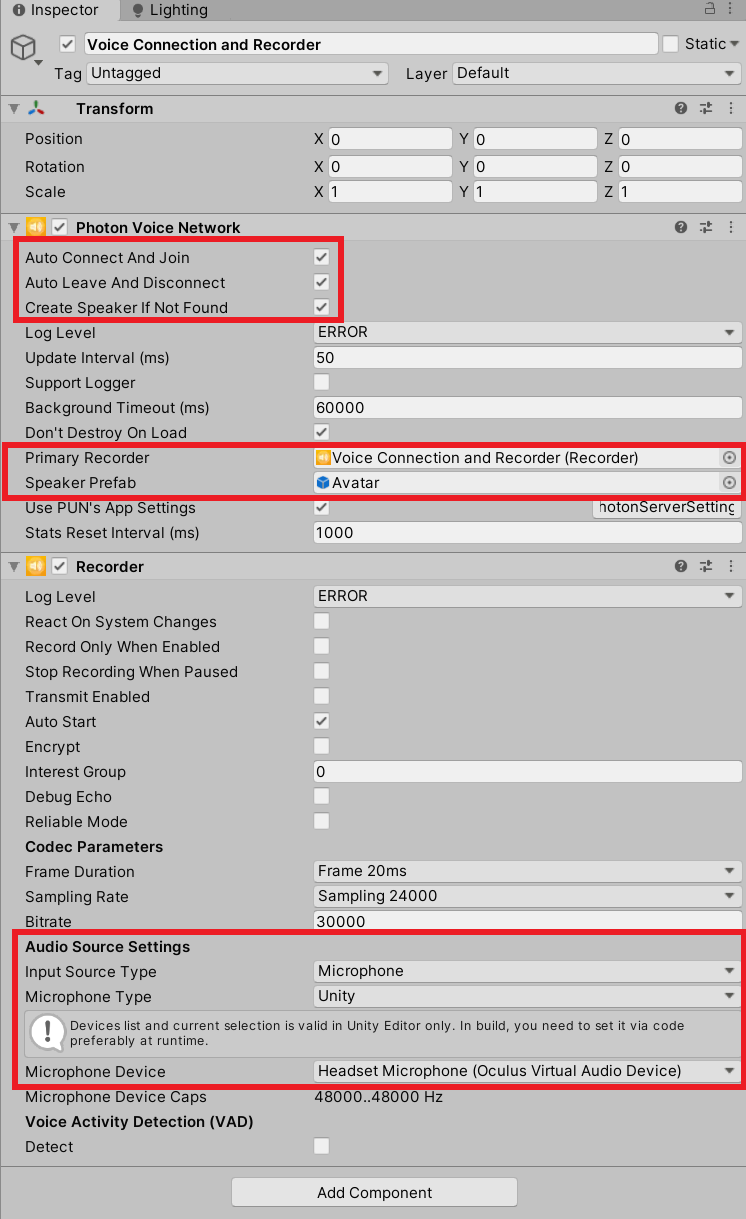 Generate via Photon Network at the place where Prefab called Avatar is attached
Avatar (sync object) is set.

Avatar also needs to be set, so let’s take a look.

Requires ** Speaker ** and ** PhotonVoiceView **.
AudioSource will be added automatically. 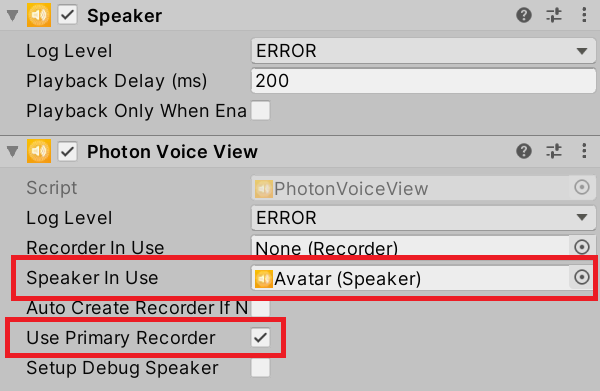 Set the part surrounded by the red frame.
** SpeakerInUse attaches from its own object **.

This completes the approximate settings.

The avatar used this time is the one in the image below.

The sphere is the head and the mouth is an independent object placed in the child hierarchy of the head.

I borrowed it from a library for VR / AR communication synchronization implementation called Normcore and.

This time, I would like to make this ** mouth object snappy according to the voice **.

Originally, the code that makes the mouth crisp in Normcore’s library
Since it is published in the document, I will use it for PUN2.

The full code is below.

_voice.RecorderInUse.TransmitEnabled = true;
Voice exchange has started at the point.

_voice.RecorderInUse.LevelMeter.CurrentAvgAmp
The waveform of the average sound for the last 0.5 seconds is acquired by.

This waveform is used to change the scale of the mouth object in the Y-axis direction.

In the final SyncMouth method, changes in the size of the mouth object are synchronized on both clients.

Since it is a GIF, there is no sound, but the sound of the other party is heard from the HMD
I was able to confirm that my mouth was crisp.

Connected, not connected, or the audio is extremely quiet
Since it was covered with defects, I will add it as soon as the cause is known.