Get closer to the mystery of My.Forms

First, create a VB.NET WinForms project and write code like the one below.
(Form1 has two buttons, Button1 and Button2, and I have set the Click event handler in the designer)

The HelloWorldB method doesn’t pass an instance of Form1 and for some reason it looks like it’s directly accessing the Form1.Text property where it hasn’t been instantiated.

In Visual Studio, hover your mouse cursor over Form1 of HelloWorldB and you should see something like this:

By the way, when I decompile to C # with ILSpy, it looks like this: 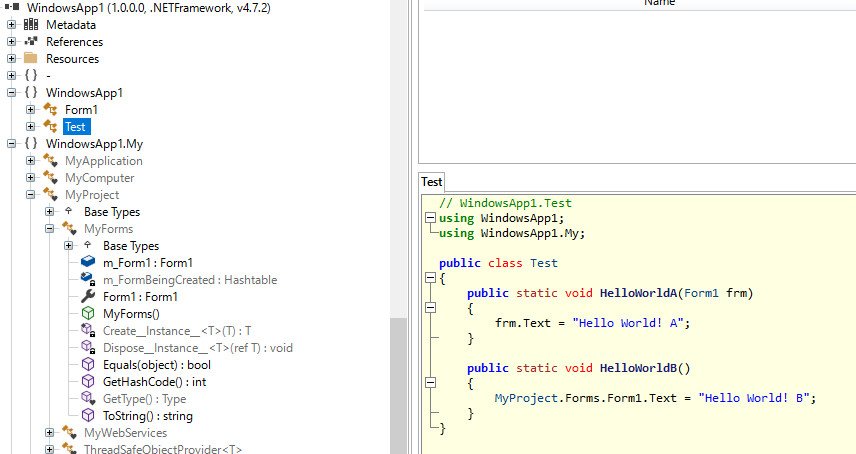 A namespace called WindowsApp1.My and a class called MyOO are created in it.
Inside the MyProject class is a static property called Forms, inside which is the Form1 property.
Looking at the code for the HelloWorldB method in C #,

It has become. VB.NET is creating an instance of a form in My.MyProject.Forms without permission
[Form class name.property]
If you write, it will omit My.MyProject.Forms and interpret it as accessing it. ~~ Do something completely extra. ~~

After hunting for related documentation, I found the following: It seems that there are various other My objects. If you are not good at English, please use Google Translate.
My.Forms Object
My.Internals: Examining the Visual Basic My Feature
Objects implicitly instantiated in vb.net?

VB.NET is launched directly from the Form with the default project settings, in this case an instance of My.Forms is used, but like C #, create a Main method and change the startup object in the project settings. And suppose you create a form by launching it from the Main method.

The mainstream of .NET development is C #, and VB.NET seems to stop developing and I think it will disappear in the future, but when porting existing VB.NET code to C #, implicit like My.Forms Since the object of is an element that C # does not have, if there is a reference part, it may be addictive, so be careful.